Home » Cardiovascular » Aortic Disease: The Elephant in the Room

Aortic Disease: The Elephant in the Room 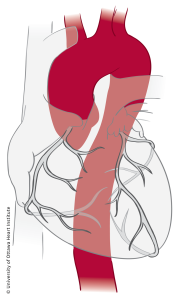 Aortic disease is often referred to as a silent condition because there are usually no symptoms to alert either the patient or doctor. The consequences, however, can be catastrophic, as in the case of an aortic dissection. Rapid diagnosis and treatment are critical because the mortality rate can be as much as 1 per cent per hour until it is surgically repaired.

The vital role of the aorta captured the imagination of Munir Boodhwani, MD, early in his career, but the University of Ottawa Heart Institute surgeon has been concerned about how often it is overlooked as a source of health problems. “Aortic disease is often perceived as an orphan disease,” he observed. To him, it is the elephant in the room.

“Historically, the care of aortic disease has been somewhat unfocused because everyone was looking at it from their own perspective,” he explained. The problem might be discovered by a family physician, a cardiologist, a vascular surgeon, or an internal medicine specialist, each approaching it in his or her own distinct fashion.

Instead, Dr. Boodhwani wanted to create a setting where aortic disease could take centre stage so that it could become better understood and better treated by the medical community. After starting with the Heart Institute five years ago, he set about laying the foundation for a formal Aortic Clinic, which was established at the end of 2010.

This facility, which now includes two surgeons, three cardiologists, and a nurse coordinator, has dedicated a new degree of attention to patients whose aortas may represent a threat to their health. “If you build it, they will come,” he said, with some satisfaction, pointing to the patient referrals that began immediately and continue to grow. Some 700 of these patients are now being followed, with another 200 arriving every year.

The key feature of aortic disease is a breakdown of the tissue that sustains the artery, weakening the integrity of the blood vessel wall. This, in turn, leads to enlargement and further weakness. The weakest portions can become aneurysms that could eventually give way, resulting in aortic dissections. These can have catastrophic consequences. The valve that controls blood flow through the artery can be similarly affected, making the need for treatment all the more urgent. If aortic disease is caught in time, patients are taken into surgery as quickly as possible so that the damage can be repaired or parts of the artery replaced.

While common factors such as smoking and high blood pressure are definitely associated with aortic disease, research is revealing more subtle causes. Inflammatory ailments, such as rheumatic or autoimmune diseases, can lead to aneurysms or dissections. Genetically transmitted connective tissue disorders, such as Marfan syndrome and Loeys-Dietz syndrome, also play a role.

“The family practitioners are the front line,” explained Kathryn McLean, the Aortic Clinic’s nurse coordinator. “They’re the ones patients are seeing on a regular basis. If the doctor gets an echocardiogram or a CT scan and all of a sudden something’s there, it has to mean something to them.”

The clinic mounts monthly rounds which allow participants from different disciplines to consider the many facets of more difficult cases, such as those in which cancer and aortic disease appear together.

Dr. Boodhwani co-chaired a panel that developed the Canadian Cardiovascular Society’s first position statement on the management of thoracic aortic disease (TAD), which was published in the Canadian Journal of Cardiology at the beginning of 2014.

“Comprehensive management of TAD spans multiple disciplines, including but not limited to cardiac surgery, vascular surgery, cardiology, genetics, imaging, and adult congenital heart disease,” concluded the panel’s statement. “Therefore, care for these patients is best provided in such a multidisciplinary environment and clinics are currently emerging across major cardiac centres in Canada.

[This posting is an abbreviated version of an article that originally appeared in The Beat.]